2 months since yolanda. it’s my 1st time to land in leyte. i arrive and do not spend too much time in tacloban city –2 ships crashing on top of entire villages, an oil tank dredged over to someone’s backyard, a city that appears to have been bombed over and over, by explosions made purely of the fiercest winds, ocean waves, and terrifying rain. instead i ride out farther down the coastline, town after town, to understand what else had happened. 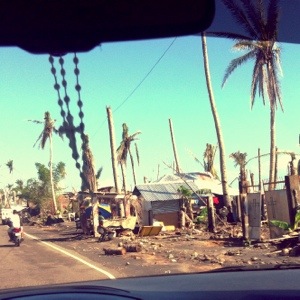 palo, santa fe, tolosa, tanauan, dulag, pastrana, dagami, javier, alang alang, barugo. my eyes simply could not understand. outside the city death still screams everywhere. where vast coconut plantations were are now endless fields of matchsticks sticking out of the ground. rice fields turned into dark swamps. iron sheets must have flown in the wind like rolls of toilet paper. wooden huts crumbled now swallowed whole by the earth. concrete walls crushed like styrofoam. once in a while a waft of decay would still blow by.

people of rice.
one step at a time, i saw farmers walk through their fields planting rice again in time for the harvest in march, while thunder clouds still loom over us.
people of copra.
fallen coconuts have been collected, piled up, broken, the white meat readied for the last burning. centuries of enslavement. this is all the farmers know to do, scraping a handful of coins for backbreaking harvest, faces blackened by smoke. yolanda has killed all the landlords’ trees, maybe now the farmers are freed — but what do they do next? perhaps they never knew.

people of the storm.

the main roads have all been cleared. military trucks collect endless mounds of debris. i’ve visited many town halls, and municipal social workers say no one goes hungry now. we drove through small dirt roads to go deeper into villages. relief goods come in abundant loads; all barangays are fed. but houses are still wrecked, leaking and flooded. tents are hot in the day and cold at night. no one speaks of the need for ‘counselling’, but the same fear grips them when rain again begins to pour. angels and marias stand over mass graves to look over the dead; names are each handwritten on pieces of wood. a statue of the christ standing on imelda’s mansion on the mountain top is miraculously unscathed; it once looked out with arms open to the sea, but now he faces us inland.

“wala man kaming problema dito. bago man mag yolanda gutom na kami.” (we don’t have problems here. even before yolanda hit us we were already hungry.) a parish priest rebuilding his church for st francis of assisi talks to me about poverty. the roof has been shredded and ripped off like carton, and the padre still celebrates a packed sunday mass. his homily was weeping uncontrollably at the lectern. “mabuti maging pobre. matagal na kaming survivor” (it’s good to be poor. we have long been survivors), he tells me for some consolation.

philippine flags tied to bamboo poles are raised on top of trees, ripped rooftops, and broken electric poles. a strange sea of fluttering flags, i thought: well, no one needs to be told we are in the philippines. but they seem to call out to the world: UNFPA, UNHCR, World Food Program, USAID, Tzu Chi, UNDP, the Korean Army Engineers… all of them and many many more are here. the flags rally everyone to stand up on their feet. “bangon leyte.” “tindig palo.” “bangon javier.” “bangon pilipinas.” stand up, stand up tall, they say.

through the twisted queues in the manila airport 3 days ago, i stood by a tall foreigner pacing restless for a seat in the next flight. his ID showed he’s part of the red cross medical team. spotting his rolled up outdoor gear, i thought i smelled the pine trees of british columbia for a bit. we could have been classmates. we exchanged the warmest of smiles; his had a glow of sleepless exhaustion, and mine of deepest gratitude. i wanted to wrap my short arms around this giant to say: “maraming salamat, thank you for being here.”

now on my return flight i watch an old man sweep in the tacloban airport. without any walls or glass windows, airplane fumes blow straight at us in the waiting grounds. i watch manong and his thin dark frame gently piling grey dust with his broom. i start to cry, watching his slow persistence, the futility of cleaning an endless stream of dirt. just like other men who hammer new iron sheets over their broken house frames, one nail at a time. repetition, work, effort. to forget for a moment the 10,000 lives gone, missing, buried, rotting all underneath us. how long before we fall again? how long before we rise back up?

One thought on “people of the storm”