yesterday we took Yoga out into the streets. not to practice under the shade of trees, with clean crisp air, or on soft green grass. instead we rolled our mats out on the tomas morato rotonda (the boy scouts’ memorial circle in quezon city), with cars honking and driving all around us, and with the noise, pain, and confusion in the world held deep within us. this was by far our most difficult and most incredible practice yet! inhale, breathe in all the suffering, the death and the terror in. you can do it, your hearts are strong! pause, hold it in. and exhale, breathe all of that out! out of you, out, out, out, release them. inhale, open your heart wider now, draw the pains of war away from gaza, take it away from them. your heart is strong! pause, hold the deep darkness in. exhale, breathe all of that out! not a bit left in you! release. tears started streaming down our faces. trembling, blazing bright, we kept our eyes closed, the inner gaze kept within. we continued to breathe long and deep, all together now. for the next 30 minutes, we continued to move with our breath, flowing through a string of asanas. each moment the focus was held deep within. remember why you are here! remember why you are here! each movement opened the heart, moved life, breath and power all throughout our bodies. each time we looked up, there was blue sky and white clouds high up above to greet us! and each time we planted the foot down, there was the strong earth beneath us! breathing, moving, breathing, moving, sending Life and Peace to those suffering in the war. we then laid down in savasana, in a complete surrender, in complete trust that we now have our role to play –and we will play it well! 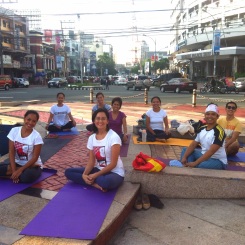 ‘Yoga’ means ‘Oneness.’ pagbubuo, pagsasama-sama, paghihilom. bitak-bitak tayong lahat ngayon. ang isip wala sa katawan, ang puso nakakaligtaan. hindi lang tayo watak-watak sa ating sariling kalooban, pero pati na rin sa ating mga pamilya, komunidad, sa ating bansa, at sa buong mundo! panahon na para ipagbuo muli ang lahat-lahat.  — Yoga continued from our seated meditation, and out, as we joined a larger group of activists and artists coming together calling for an end to the war in gaza. there were also our filipino children, present for the children of palestine. it is now time when i become you. and you become me. your pain i feel, and mine you feel too. we are all coming together now. 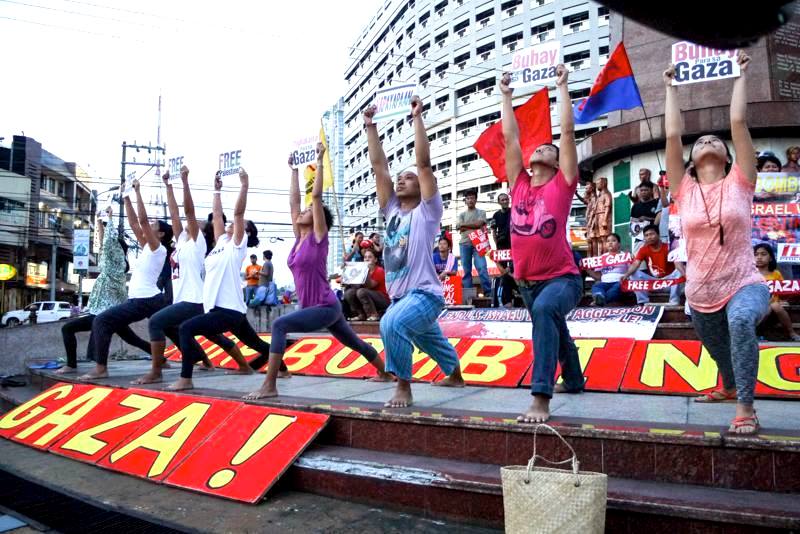 statements were read condemning the war. songs were sung for peace. candles were lit too for a beautiful vigil. we were also gladly invited to come forward and share ourselves with everyone. without a name or an official affiliation, our team of yogis formed a line in front and together moved into Warrior 1, Tindig Bagani. the front leg kneeling, the back leg pressing straight and strong into the earth, rooting deep into our seated foundation. we breathed our strong hearts forward, and floated our arms up towards the sky, gazing up, offering our truth, said loud and clear. Buhay Para Sa Gaza! (Life For Gaza!) Pagkakaisa Para Sa Palestina! (Unity For Palestine!) Paggalang Sa Sangkatauhan! (Respect For All of Humanity!) and this is our role to play, for all of humanity.

[photos from the action]